Type your search terms above and press return to see the search results.

Two plus years ago I found the time to not only take pictures of Evan but blog about him EVERY single month what he was up to, what we were up to how my fitness stuff has changed, house updates ETC.   When I became prego with MAV they all said “you will have less and less pictures of your second baby, it’s just how it goes” – this is totally off base for me because I have almost 9K pictures on my phone alone (Apple LOVES me… Such a loyal spendy customer) and I have an amazing DSLR case that is exploding with full SD cards.  But I really haven’t carved out the super important time to write about his milestones, his amazingness.  But life happens. You get busy, you “prioritize.”  I just so happen to be guilty of mis-prioritizing from time to time.

Mr. MAV is SEVEN MONTHS OLD!  I thought time passed quickly with Evan’s babyhood but it has passed much much more quickly this time around.  I simply cannot imagine life without MAV.  It has been the best seven months.  Here are a few things he is up to:

Being perfect.  Yeah yea, I know we all say this but he is the most laid back sweet calm easy baby I’ve ever seen.  I said this a lot about Evan, because he was a great baby too but Michael is just – always happy.  Until he is hungry or tired.  There is no guessing with him.  His favorite things to do are laugh, smile and scream.  His least favorite thing to do is eating solids (and you’d never guess by looking or holding him, dude is SOLID).  We’ve been working hardcore on solids and he just isn’t having them.  He will gag until he throws up sometimes (most times?).  He’s just into mom’s milk. ha. MAV is lightening fast.  For instance, we tried peas the other day (our most successful feat yet!) I turned around for not even a second and he decided he’d rather play with the bright green stuff:

And so fun with food continues.  One thing we all point out is MAV’s adorable right side dimple.  My happy dude shows it off quite often:

Michael is super strong, master roller, and beefy.  Solid guy, he is almost twenty lbs and has two front bottom teeth that started poking through right before his seventh month of life.  He has handled teething SO MUCH BETTER THAN EVAN did.  So that’s been great.  We aren’t crawling yet, backward scooting.. but no crawling:

He’s mastering cat-cow. I see it happening soonish but I’m in zero rush to have two mobile dudes.  Michael LOVES the bouncer in small doses and is really starting to just enjoy sitting an taking toys out of baskets, his hand-eye coordination is incredible and he’s starting to use his fingers to pick things instead of full double hand grab.  Everything naturally goes straight to his mouth.. he chews on everything.  He isn’t amazing at naps because EVERYTHING wakes him up but at night – he is almost always AMAZING.  We have a few nights where he wants to party at 2am but mostly he really sleeps from ~8 to 6. 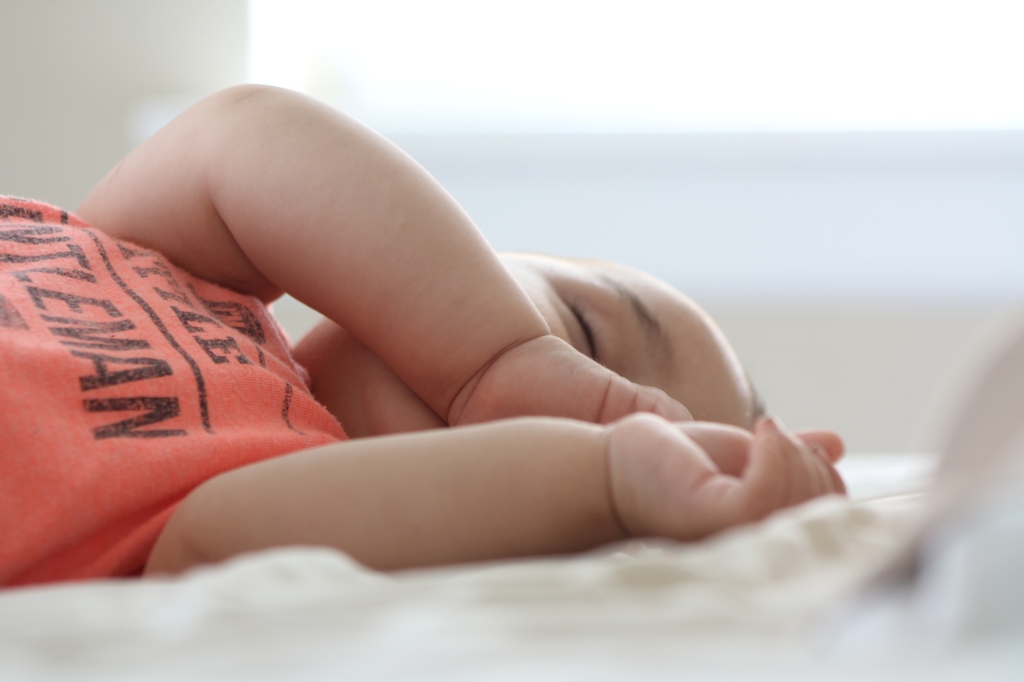 How’s Evan?  Also great and ALMOST 3!  Dude. How is this possible?  He absolutely loves his brother “baby Michael.” We do have some jealousy moments but he really does well overall with lil Mike.